Top
You are here: Home / blog / What is Shutterspeed?

Photography is essentially a mixture of art and science. This fact, freaked me out for a long time, and made me afraid to get off “auto” mode. However, once I understood the basics, it’s really quite simple (as most things are).

Shutter speed is a good example of this dicatomy in photography. It’s a technical topic, and once you learn how to manipulate shutter speed, the image you hold in your mind, will oftentimes be achieved inside the frame. From photos that are crisp, to free-frame action shots, to ethereal and velvety waterfall scenes.

What is shutter speed?

Shutter speed provides two things. A fast shutter speed will allow you to freeze time and capture a slice of whatever action is happening. Whereas a really slow shutter speed that opens up the aperture to allow more light in which helps you expose your shot correctly.

“Then there’s the instance, say when you’re taking photos during the blue hour or in a darker enviornment. You’re going to want a really slow shutter speed that opens the aperture to let in more light,” Carlson says. “You can use slow shutter speed in a dimmer environment when you need more light to expose a shot correctly.”

When adjusting shutter speed, consider light and motion. If you leave the shutter open a longer amount of time to capture more light, motion will affect the photo — maybe in ways you don’t like.

“The problem is that when the shutter is open longer, anything that moves in the frame during that time gets blurrier.”

“The problem is that when the shutter is open longer, anything that moves in the frame during that time gets blurrier,” photographer, writer, and teacher Ben Long says of camera shake. “Another problem is when the camera shutter is open for a long time and you move the camera. You can’t help but do that because you’re a living human being.”

A slow shutter speed can help you illuminate a darker scene, as it brings more light through the lens. But with a faster shutter speed, the lens is open for a shorter length of time, so less light enters the lens. That makes low light a challenge and demonstrates the importance of a well-lit scene. Be mindful of this as you shoot or you could end up with very dark photos that miss what you want to capture.

Properly setting your shutter speed is crucial when it comes to not missing the moment, especially with fast-moving subjects.

“A couple months ago, I was photographing cheetahs that were hunting,” animal photographer and New York Timesbest-selling author Carli Davidson tells us. “You can’t just say, ‘Hey, can you redo that? Can you slow down and do that again because my shutter speed wasn’t fast enough and the image is blurry?’”

Experimentation with shutter speed in advance of a shoot will help give you a mastery of what you need and when you need it.

When you don’t want motion blur — the effect caused by a subject or the camera moving during a long exposure/slow shutter speed shot — you can freeze time with a fast shutter speed.

“Two-year-olds are notorious for never standing still,” Carlson says. “You can set your camera to a higher shutter speed so they’re not blurry when you take that shot.”

“It goes back to your reason for taking the photograph,” photographer and designer Shawn Ingersoll explains. “Are you wanting to capture motion or a split-second in time where something is moving but it doesn’t look like it? Like a rock falling into a pond, so you see that split-second where the water flies up into the air.”

Water, an element that can be as still as a dewdrop or as powerful as a tsunami, showcases how shutter speed can tell two stories.

“If you’re looking at the ocean and it’s twilight, you might want a long exposure of 30 seconds,” Carlson suggests. “That can give you more light so that everything isn’t completely dark. It will smooth out all the waves and give you this really soft, glassy look for the water.”

And yet, that same ocean in a single snapshot at a quick shutter speed may showcase a rippling white cap or the roil of a choppy sea. It’s choices like these that give photographers creative options driven by technical adjustments.

“I used to photograph basketball in this dark gym,” journalist and wedding photographer Anna Goellner recalls. “To get the proper exposure, I would sometimes have to go down to a shutter speed of 1/50, but then I could see movement in my images, which I didn’t want. In sports photography, you want images to be clean.”

When the end goal of your shoot is a sharp, in-focus picture, perhaps capturing the look on an athlete’s face as they hit that winning shot, you want a fast shutter speed to freeze a moving object. It tells the story by pausing a particular moment. But shots that stop time and remove motion can limit certain storytelling possibilities.

“When a basketball team was way ahead or I had all the good pictures I needed, I’d just play with that movement,” Goellner continues. “Following a football player down the field while he was running and capturing that movement — I think it’s a lot of fun to be artistic with that. You can definitely capture movement in sports by playing with the shutter speed.”

Telling a story or capturing action that goes beyond a single moment is possible with slow shutter speeds. Sometimes, it’s even necessary.

“If, instead, I use a slower shutter speed and time my camera to follow the car as it goes through the frame,” continues Long, “the car is going to have a little bit of blur, but the background is going to be totally smeared — it’s going to look like [the car] was going 200 miles an hour. That’s a creative choice I get to make at the time to impart a greater sense of the true reality in the scene.”

How do you choose a shutter speed?

Ask yourself, “What type of photo do I want to take?” Determining shutter speed is something that requires you to consider the end goal of your photo.

“If you take a waterfall picture at a regular shutter speed, the water freezes and you get all that texture,” Carlson says. “But you’ve also seen pictures of waterfalls where the water is smooth and silky. It’s a cool effect and it’s super easy to do. All you do is make sure that the camera doesn’t move and you shoot with a long shutter speed. All those little details of the water running down will blend together and give you that look.”

Shutter speed gives the photographer the ability to use motion — or to freeze motion — to tell a tale or capture a vibe. Whether you choose to take  that split-second snapshot with a short shutter speed or to portray the motion of subjects in a slow shutter speed photo, you’re opening up narrative possibilities. Is it about capturing the moment as is or trying to portray how we perceive the moment? Or even to capture the energy of the moment instead of simply the visual details? Mastering shutter speed puts that power into your hands.

And while technical knowledge is helpful in seeking this mastery, it’s practice that inevitably will build this skill for any photographer.

“You could have academic knowledge of how photography works,” Davidson relays. “But you also need to have the practical knowledge of trying it and practicing it all the time to put the two together.” 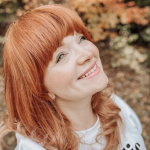 Nicole Olea’s love language is communication. She does this best using her keyboard as a freelance copywriter and editor. Creative and resilient with high-level experience in social media management, content creation, and eCommerce marketing, Nicole Olea was a professional volunteer, sharing her skills with various non-profit organizations who paid her in hugs. For the last 20 years, she’s lived a quasi-nomadic life, moving across the country and the Atlantic with her active-duty husband and their three kids. Today, she accompanies teens as they discover Christ as the Director of Youth Ministry & Communciations at her parish. She’s awkwardly stumbling toward her goal of becoming a saint. She’s got God-sized dreams and wants you to have them too!

free goodies straight to your inbox

Stay up to date

She’s on top of the world! #dmvphotographer #f

I thought I’d take this opportunity to introduce

Over the last few months the Holy Spirit is callin

Today we remember and honor MLK. He tirelessly wor

Hello friends! What is one morning routine you enj

How did you spend your Saturday? I made a quick T